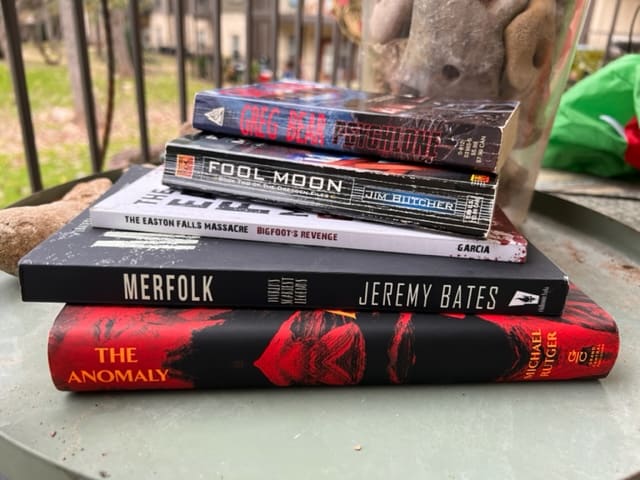 5 Works of Paranormal Fiction That Belong on Your Book Shelf

Have you ever been curious about the unknown? Not only are works of paranormal fiction fascinating and often highly imaginative, but they can also transport readers to a different realm where anything is possible. Whether it’s a journey full of adventure and suspense or stories that evoke horror, these reads provide an alternate perspective that makes readers come back wanting more. If you’re ready to explore this world of the supernatural and morbidly strange, there are plenty of books out there that could fit right into your reading list. So get ready – we’ve compiled a selection of our favorite works of paranormal fiction that belong on any book shelf!

This quick read is an adrenaline fueled thrill ride that will leave you hankering for the sequel. I’ve badgered Holly and Ryan a few times over the last few months for updates on part #2 (the cliffhanger ending will haunt your dreams) and they assure me that it is on the way (likely to arrive in 2023). For now though, check out part #1 of The Easton Falls Massacre. This is Bigfoot fiction done right, written by creators familiar with the source material and who possess a powerful knack for storytelling. Great characters, knuckle biting action and some of the best use of foreshadowing I’ve run across in my recent reads. The authors weave a tapestry of dread which slowly settles over the shoulders of the reader until the conclusion; if you weren’t scared of Bigfoot before, you’re about to be. One of the few books I read and then immediately read again in 2021.

Greg Bear is a lauded writer with over 30 novels to his name. Recently he made contributions to the expanded universe of the Halo video game series with the Forerunner trilogy, and has won numerous major literary awards during his career. In 1979 Bear told the story of Larry Fowler, a hapless everyman who is inexplicably swept up in a bizarre and deadly phenomena. A high body count, chilling imagery and some high concept supernatural speculation. As much Sci-fi as paranormal but no less Fortean for it, and with a streak of the macabre that will appear to horror fans as well.

The Anomaly by Michael Rutger

A horror mystery novel following the exploits of a TV-personality paranormal investigator. Given the heavy influence Youtubers, television hosts and like figures have had on the paranormal community in recent years, it’s a wonder that it took someone this long to write a fictional book about it. But Michael Rutger did, and The Anomaly delivers in spades. Monsters, hidden treasures and ancient secrets buried within the stone walls of the Grand Canyon serve as the foundation of this one, and a hook that I was genuinely unable to guess at until it arrived ties the whole story together. Give it a whirl.

The Dresden Files has been around for a while and boasts an impressive catalog of work. Jim Butcher has been penning the adventures of Harry Dresden since the early 2000s, and I finally decided to give the staple series a try this year. My favorite so far has been Book 2: Fool Moon, which concerns werewolves of every imaginable sort. My own fascination with Dogmen has blossomed in recent years, and this fun take on the traditional werewolf mythos is grounded in real-world mythology and urban legend. A little bit of Doctor Who, a little bit of Harry Potter, a whole lot of originality and a true page turner. Expect to find yourself hunting down all the other books in the series shortly after finishing this (or any other) one.

Mermaids, like Werewolves, are one of those creatures that we just keep talking about. From ancient cave paintings to modern day mythology, half-fish humanoids have seemingly always been with us. Jeremy Bates tells the story of the mermaid through a darker lens than what we’re used to, with more in common to the ancient Sirens of Greece than Ariel and her aquatic entourage. Bates presents the Mermaid – or Merfolk – in a way that is truly unsettling, and tells the story in his dynamic, just-gotta-see-what-happens-next prose. Many of Mr. Bates works also belong on lists like this one, but Merfolk is a recent favorite. Fingers crossed that Jeremy Bates makes an appearance in a future edition of Paranormality (I’m working on it).

Processing…
Success! You're on the list.
Whoops! There was an error and we couldn't process your subscription. Please reload the page and try again.
Continue Reading
You may also like...
Related Topics:Bigfoot, ufos