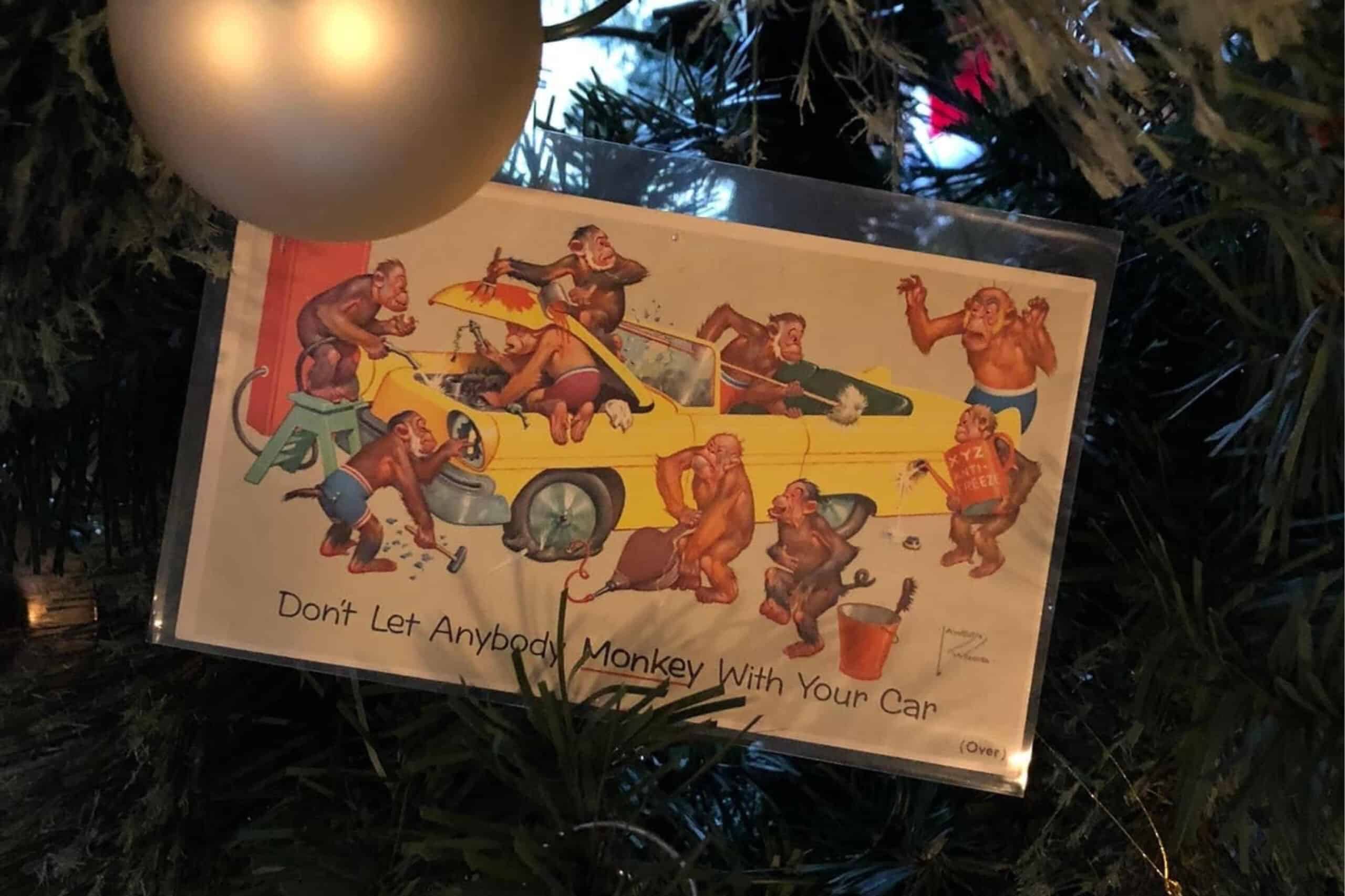 Children the world over spend Christmas Eve dreaming of gifts delivered by air, of a man landing from on high spreading joy and mirth. Some even scan the skies, hoping to catch a glimpse of a flying sleigh or reindeer traversing the clouds. Gift giving involving aerial beings is not a foreign concept for the holiday season, but flying saucer occupants receiving gifts from earthlings is alien to our expectations.

Such was the case, however, one Christmas Day in 1955. At the home of contactee Buck Nelson, a special guest was among the celebrants- Buck’s flying saucer friend Bucky the Spaceman. Bucky had taken Buck on a round-trip space journey a few months prior, to Mars, the Moon, and Venus, the story of which can be found in Buck’s appropriately titled book “My Trip to Mars, the Moon and Venus”. Buck was even allowed to drive the saucer at one point.

He learned much about our brothers from space, and their pets- notably, a 385 lb dog called Bo had accompanied Bucky and the landing party. It was also revealed that Bucky was actually an expatriate earthling, who was in fact related to Buck- and this Christmas, he came to visit his terrestrial cousin and then his parents before heading back to Venus.

A friend of Buck’s, Fanny Lowery, had anticipated Bucky’s return. In the hope that he’d visit for the holidays, Fannie had mailed a special gift to Buck’s ranch, to be delivered to Bucky.  At 1:30 a.m., we’re told, on Christmas Day of 1955, Bucky arrived and was presented with an envelope which contained Mrs. Lowery’s gift: an advertisement for Prestone antifreeze.

“Bucky laughed like an eight-year-old kid when he saw the picture on his card.” Reports Buck Nelson, “…it had a picture of 8 or 9 monkeys doing all sorts of wrong things to a car… beneath the picture, it said, “Don’t Let Anyone Monkey Around Your Car.” Written between the lines of advertising was the question “Does anyone monkey around Saucers like this?””

According to Bucky, this funny little card was “The first gift which had ever been knowingly sent by mail to a person from another planet from a person on earth.” Quite the distinction!

Bucky then proceeded to record a Christmas Message to the World on tape. He began by thanking Fanny for the gift, and answering her question. “Yes, it has happened to our ships, torn apart for souvenirs.”

His Christmas Message continued with a wish for peace on earth, as only a Space Brother could deliver it- he implored humanity to give up atomic weapons, and forecast certain doom for civilization if the warning went unheeded. He then hung around and mingled with Buck’s other guests throughout the day, one of whom tried to sell him insurance. Later he pontificated aloud about canned pork and beans, before finally departing to visit his folks.

This charming vignette is an example of the wonderful ephemera to be found in the history of UFOlogy; these silly little moments in the stories of contactees, these slices of life are almost too mundane, too human, while are the same time too fantastic and absurd for their context to be forgotten about. So this Christmas season, know that somewhere in a museum on Venus there is probably a glass case where sits that historic “first gift” which Bucky treasured so much. As you put out cookies and milk for Santa, think about clipping an ad for a Spaceman; and for goodness sake, give up those nukes!

Processing…
Success! You're on the list.
Whoops! There was an error and we couldn't process your subscription. Please reload the page and try again.
Continue Reading
You may also like...
Related Topics:Aliens, Featured, UFO