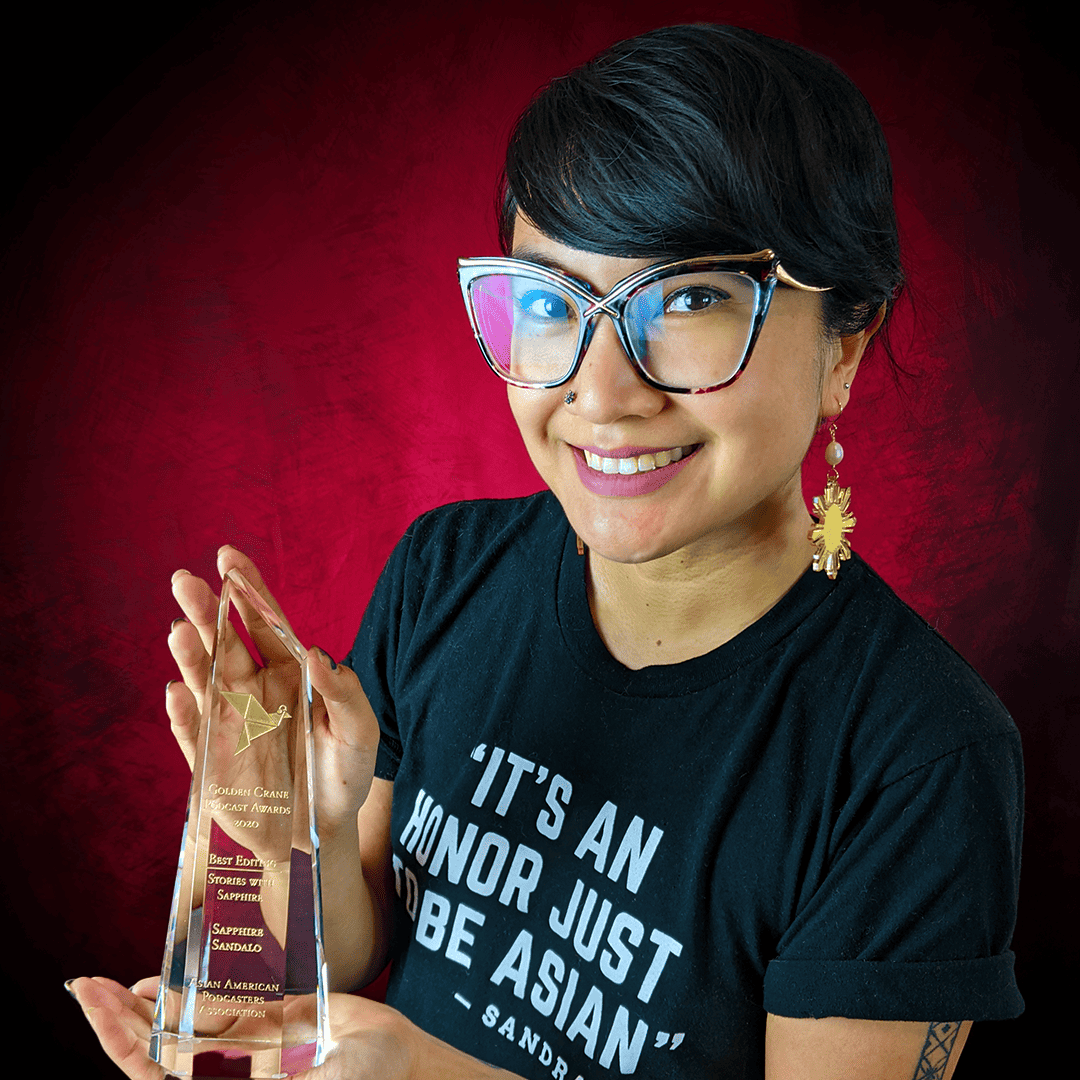 Part of my interest in wanting to interview paranormal podcasters is to get a deep dive into the personality and passion that goes into their work.  Whether it’s a hobbyist pastime for most or a full-time occupation for the few, the drive to get their content out to the public is equally the same.  The paranormal community has grown by leaps and bounds in the past decade, and with COVID lockdowns, the number of followers continued to increase.  With this increase of devotees, more people find themselves producing content of their own.

I had the honor the other day to interview, whom I consider a content-producing machine and Paranormal Personality Superstar, Sapphire Sandalo.  Stories with Sapphire has remained a constant at the top 5 Paranormal Podcasts on the Paranormality Magazine Top.  The show features stories told by the creator, Sapphire, and other guests she brings on.  She delves into everything paranormal from Filipino folklore, which includes spirits and cryptids, to possessions, curses, and witchcraft.  Not only does she produce and host the shows she also scores all her own music for it as well.

Sapphire was inspired to be a content producer at the ripe age of 9.  Sapphire said, “I begged and my mother to get me a TalkGirl recorder for Christmas one year”.  If you don’t know what that is, it is the girl’s version of a voice recorder, TalkBoy, used my Kevin McAlister in Home Alone2.  Sapphire and her sister used the TalkGirl tape recorder to put on impromptu radio dramas in her backyard.    A big part of Sapphire’s inspiration is her grandfather Lolo.  Lolo was born and raised in the Philippines.  He then migrated to the United States.  With Lolo came a wealth of stories and experiences of Filipino folklore.  In one of the earlier episodes of Stories with Sapphire, you can hear a recording Sapphire made of Lolo (Grandpa) Rudy telling one of his stories.  It may be a little hard to hear but he possesses an animated personality in his voice in the small clip you hear.

Even with this introduction into the paranormal at a Sapphire admits she was a bit of a scaredy-cat growing up.  Horror movies, ghost stories, and even the thought of going to the second floor of her home were some this she dreaded doing.  She says, “Despite how scared I was of everything, I still love ghost stories specifically”.  “It’s part of our nature to seek out danger”, she continues, “Its part of a practice round for when real danger comes along.”  “This is why people love horror movies and ghost stories.” It wasn’t up until 10 years ago that she wanted to pursue this as a career in the entertainment industry.  She says, “I loved to draw, and I loved telling stories.”  This was a perfect combination of all these things.

She started animating for a television show about animated retellings of crazy party stories from the people that attended.  This lead her to the idea of doing something similar, “This would be so cool, but with ghost stories.”  She pitched the idea to a YouTube channel, she narrated different ghost stories, some from her family and other stories from her friends, and then she added animation to it.

I went on to ask Sapphire, “Did you always have an image in your mind of what the stories looked like before you put them on paper?”  She responded, “I didn’t really imagine what they looked like until I sat down and drew them, and then it felt more real to me.”  Sapphire goes on to say, “One of her first ones is when her grandpa was chased by a manananggal, a demon woman, who separates from her torso at night, flying around looking for pregnant women so she can suck out their unborn fetus.”  She says, “It wasn’t until she sat down, and drew her, that the cryptid came to life for her.”

“Were there any books or movies in particular that you enjoyed, early on, that would have contributed to your content creation?”  Sapphire replies, “Absolutely, Scary Stories to tell in the dark, with the black and white drawings and Goosebumps were the perfect level of scary.”  She goes on to say, “There was this Manga anime called, Pet Shop of Horrors, and I remember loving it so much.  It takes place in Chinatown at a pet shop, but the pet they sell aren’t really pets.  There was a couple that went to the pet shop to get a pet because they lost their daughter to drug addiction, but the pet looked just like their daughter.”  “I didn’t realize how much that show influenced my storytelling style!”

Filipino folklore and storytelling runs deep in Sapphire’s family.  While migrating to the United States, Sapphire tells a story of how her Lolo came across a cryptid from the Hawaiian Islands, known as the Menehune.  These little folks, who are said to have inhabited the islands before men, have been known to be master craftsmen and will only come out at night.  While living on the island, Sapphire’s uncle, Tito Gobby, failed to come home one night.  He showed up a day later and the locals believed that the Menehune had taken him.  On another occasion, Lolo was building new steps on the house out of concrete.  The steps had to settle overnight, and in the morning, Lolo noticed a small footprint in the settled concrete.  He first went to blame the children, but upon further inspection, found that the footprint was almost that of a miniature adult.  Once again, the locals believed that the Menehune could be to blame.

Is there a certain formula that you like to follow when producing your podcast and YouTube series?  She says, “There are things that I do frequently, but they don’t always follow the same formula.  For the YouTube series, my writing partner and I Adam Sinker, like to take a piece of folklore and put a modern spin on it.  We like to have some sort of twist.  Even if there isn’t a moral behind it, I want to give you chills.  If it doesn’t give me chills, then it doesn’t get into the YouTube series.  For the podcast, the stories are all nonfiction and sent in via email from people that I know, so I interview them directly.  The only editing I do is for clarity purposes.  Its easier to edit the podcast because it is based on reality and real people’s experiences.  The scary part of the podcast is that it’s real.

“Now that you are on season 4 of your podcast, how have you matured since beginning your podcast?”  Sapphire says, “I am learning something constantly and that is fun for me.  If I feel like I am not learning anything, then I get very bored.  Just recently I learned how to mix audio properly and now I want to go back and fix all the other podcasts I did.  To me, that’s very exciting.  I have a tendency to obsess over the quality of it.  This has forced me to learn faster.”

“On your episode, The Witch’s Curse, your friend called you the witch that’s stuck in the broom closet.  Are there any practices that you do that fall into this category?”  Sapphire responds, “The reason I don’t call myself a witch, but I do like to dip my toes in magic.  The reason I have been called that is the cause of my interest, a witch is someone who seeks out truth and knowledge, and that alone would make me a witch.  My friend showed me that everyday ordinary things are magical.  During the pandemic we couldn’t see a lot of people, most of our interactions were online through Zoom and people were losing their minds.  When we spend time with people, that, in itself, is transformative.  If you hang out with a friend that you love, you come out of that feeling happier.  If you are around someone you don’t like, that also drains your energy.   That in itself is magical when you hang out with your friends and you change.  We were not getting that when everything went online.  As far as rituals, I am into manifestation rituals.  This may sound hokey, but I am really into vision boards.  The idea is really solid, and the two times I have made a vision board, my career has changed for the better.  I will do the very very basic forms of manifestation.  I believe in it because I’ve been able to manifest things in my life. I feel bad for people that are scared of it or don’t believe in it and I see how powerful it can be, when you use it properly, in your life.”

Tell me about the tarot readings.  “I got really interested in learning all these old pseudo-science things, like palmistry, but I never I actually sat and learned tarot cards.  I was listening to a woman on this comedy podcast, and the way she explained tarot, is that it is not a divination tool.  It’s a way to tap into your own intuition.  For example, if you’re trying to make a decision, and you flip a coin to decide what to do.  No matter what side the coin lands on, it offers you insight into what you really want.  That’s the whole point of tarot is that helps you get the response to a situation.  It’s sort of like therapy.  The beauty of it is that you can make a story out of whatever cards you get, and that is still very helpful.”

Sapphire goes on to say, “In my podcast, even if things are not paranormal or magical, and even if you explain in it in a logical way, it’s still incredible that it is happening.  You can look at a vision board with a picture of money on it and I am constantly reminded to make good financial decisions.  I find the best results are when I put pictures on there of things that I have enjoyed and people that I admire.  Nothing specific, I want to be open to whatever possibility comes up.”

My conversation with Sapphire Sandalo goes on to cover much more of her influences as a content creator.  You can catch much of our exchange on the Paranormality Media Podcast.  Sapphire even goes to tell one of her favorite, all-time ghost stories that will chill you to the bone.  If this is your first time hearing of Sapphire Sandalo, she is by far a renaissance woman.  I encourage the readers to do what I did and look into all of the content she has produced thus far.   You will not be disappointed.

More in Behind The Mic