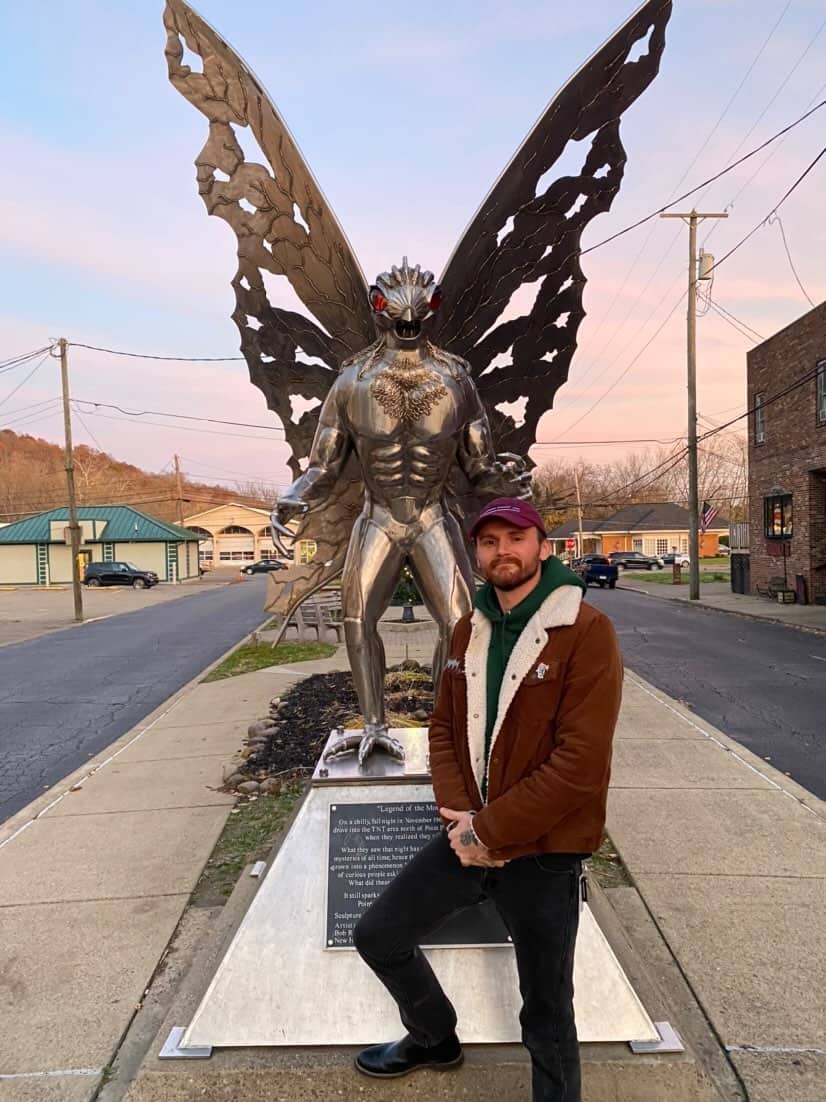 Matthew Schang is a versatile individual. He is a podcaster with a popular weekly show that has been active for nearly three years. He is a seasoned event coordinator who helped execute one of the biggest first-year events in the paranormal convention circuit in 2021. He’s an interviewer who regularly features other creators on Instagram Live streams on a recently created show called Cryptids & Cocktails. He’s a well loved figure in the still burgeoning paranormal niche, having appeared in Small Town Monsters productions, podcasts as a featured guest and numerous written pieces. He’s also a person with a broad and interesting perspective on a variety of topics. I was fortunate enough to catch Matt for an interview in January.

The Mothboys Podcast was launched in 2019. After attending the Mothman Festival in Point Pleasant in 2018 and noticing that podcasts were rather under-represented, Matt and the rest of the Mothboys team – Mothboy Mike (Michael Strayer) and Jake Haskin (we are assured that Jake is, in fact, a real person) – began what would become one of the longest running and best loved comedy/paranormal podcasts in the niche.

“On our first go, we recorded 3 episodes in a weekend and we had to ditch all of them. Jake and I were WILDLY inappropriate, and at the time Mike worked at a school. Jake and I were doing, you know, blow job jokes, really outrageous stuff.”

Shortly after recording Jake would say,

“We can’t use anything that we just recorded. A word.”

He spoke of the challenges of starting a new show in an already dense community,

“When you’re a specific niche where you’re a cryptid/comedy podcast, it’s hard to catch. It’s hard to gain footing. And it was surprising that we were able to catch, and, and it’s really made me question my faith in humanity.”

Matt is also an avid reader. His recommended volumes include,

“Dune, but they’re heavy books. And I would say the Origin of Species by Charles Darwin. But that’s another heavy book. So I would say The Road by Cormack Mcarthy, and Starship Troopers by Robert Heinlen.”

He speaks to the camp factor of Starship Troopers and cites it as “just good sci-fi.” We also discuss the eponymous movie, and he kindly offers to gift me a spare copy of the book if I haven’t read it by the next time we meet in person. This example of what it’s like to interact with Matt is an accurate one; he’s a warm person with a generosity streak and an easy manner. We continue to discuss film, and he cites his love of the Lord of The Rings trilogy, noting that it has been more than twenty years since the release of Fellowship of The Ring.

“Pete Jackson did such a great job on those movies.”

I added, “It does seem kind of perverse, right?”

Matt is also one of a trio that hosts The Order 66 Podcast, a show devoted to, what else – Star Wars. I had to ask if Order 66 would be making a return any time soon as some time has gone by since the last installment.

Matt explains that he still regularly communicates with co-hosts Yami Gonzalez and Greg Morrill through the trio’s Order 66 Group Chat, and hopes to begin new episodes with them again soon.

“The cryptid community in general has been one of the more accepting communities I think I’ve ever been a part of. I’m very appreciative of that. I really appreciate what the Cryptid community does for one another. There are sects of the cryptid community that are, maybe, a little self cannibalizing? And that’s something they need to work on, because we’re all on the same side. We’re all weirdos. We’re the odd people out. We take interest in such an interesting, obscure – for the most part – subject, and I feel like we would be better together than separated.”

Matt has experienced his fair share of high strangeness. At an early age while on a camping trip, he and a friend encountered what Matt describes a phenomena which may sound familiar to some – what he describes as Mystery Lights. Mystery Light encounters are recurring phenomena, and one need not look far to find them associated with multiple haunting, UFO and cryptid sightings and/or anecdotes.

Matt’s encounter, however, is a particularly alarming one.

“I had some events happen to me that kind of, you know, changed my perspective on all of it. I think probably the most definitive was the mystery light that I saw while night hiking with a friend. We would just choose a direction, and point, and just hike in that direction for miles and miles, and just camp wherever. We lived in the country, and it was mostly wooded areas. We went underneath this draft horse fence to get into this wooded area, and in the distance my friend and I saw this blue light, kind of swaying back and forth. And where I grew up there are back woods people who live off the grid. At a young age you’re taught that if you see a fire in the middle of the woods, don’t go towards it. So I thought it was one of these people living off the grid. And we had these machetes, because the brush was so thick, most of the time we had to cut our way through.

“We ended up just freezing. We couldn’t move. And I just remember this thing getting closer, and it felt like my ‘fight or flight’ mode kicked in but they both kicked in at once. I remember clenching that machete so hard in my hand, to the point where it hurt. But I couldn’t move – my body was like ‘run run run’ and then the other part of my body was like ‘no, you need to fight’ – and I just felt like butter. Like I was melting. I snapped out of it, I hit my friend and he snapped out of it, and we started running.

“I ran into the barbed wire fence – it did a little bit of damage to me – and my friend shot underneath the fence. I forgot it was there and that was why I ran into it, but my buddy shot under it. Before that I was hacking at the wire with my machete, because I was in panic mode, and when my buddy shot underneath the fence I hit the wire that he was going under. One of the barbed wires hooked and ripped his eyelid. He was bleeding, and then we both went under. Past that I remember coming to, we had stopped running and we were in a farmer’s field. We didn’t go up to the house because everyone and their – everyone has a gun. If there’s like, two people running around outside your house at like, I mean it was well past 2 o’clock in the morning. So we laid in the field until sunrise, and then went up to their door and asked them where we were, and we ended up in the next town over.

“So that kind of changed everything for me. I think my previous mindset was that I knew what the natural word was. It’s an interesting feeling thinking you know what reality is, and what the natural world is, and it turns your world upside down and makes you re-evaluate a lot. As someone who loves science, I guess since I was young I already thought I knew everything. When you’re a teen you know everything. And so I had to reevaluate some stuff.

I asked Matt about Cryptid Bash, the phenomenally successful event which he and the Mothboys planned and executed in just four short months in 2021.Cryptid bash 2022 is scheduled for August 6th – Morgantown West Virginia – at  Morgantown Art Party.

“We had 88 applicants and people are asking almost daily if there is any more room and if they can be put on a list. I mean, that was 88 applicants since we released it – since we said that we had the date. Within a few months, it was maybe four, four months? That’s when we decided to close it after 40. There’s a bunch of people on a waiting list, and this year we have two rooms, so there’s a little bit more space. There’s two different rooms that you kind of have to go around the block to? One room is going to be the entrance to where it was before – the side of the buildling – and then there’s another building where there’s going to be more vendors. We’ve got speakers – last year we did not – speakers this year will be all women and queer folks. I think there needs to be more representation and the Mothboys and I believe there should be more representation in the cryptid and paranormal community.”

“It will always be free. Times are hard enough for people. We want families, we want people to come and enjoy a solid afternoon.”

Matthew Schang AKA Mothboy Matt can be found on Instagram under @matthewxschang / @mothboyspodcast. He is a podcaster, event coordinator, wine connoisseur and super nice guy. You can find more information about Cryptid Bash 2022 as it becomes available by following @mothboyspodcast.

Processing…
Success! You're on the list.
Whoops! There was an error and we couldn't process your subscription. Please reload the page and try again.
Continue Reading
You may also like...
Related Topics:Interview, Mothman