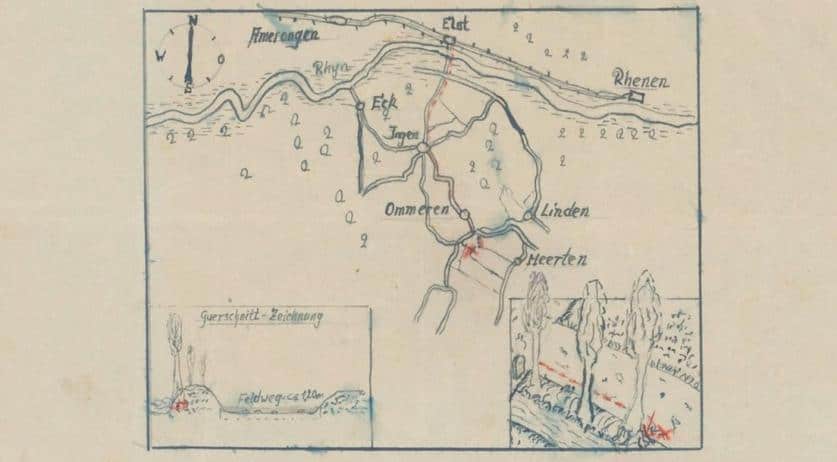 Nazi treasure map to be made public by National Archives

Commencing the new year, The National Archives of the Netherlands will be releasing a substantial amount of records that were inaccessible or accessible only with strict regulations. This is an incredible opportunity to delve into external sources and gain unique perspectives from history!

This year, the Archives’ Open Access Day is proud to share approximately 1,300 pages of revealing documents with the public. As part of this initiative you can read accounts from World War II; learn about mistreatment in internment camps, and explore historic Cabinet minister meetings.

A literal treasure map containing “clues to a never-found Nazi treasure that is said to be buried near Ommeren” will also be made public. Despite their best efforts, the treasure in the Gelderland village was never recovered.

It is rumored that the buried treasure is worth millions, and its origins date back to August 1944. “During the defense of Arnhem, there was an explosion at a branch of the Rotterdamsche Bank on the Velperweg. German soldiers put loot in their coats at the scene,” said Annet Waalkens of the National Archives in an interview with Omroep Gelderland.

It is often speculated that Nazi soldiers had stolen items such as watches, jewels, cut and polished diamonds, and jewelry. Stories say these possessions were hidden in ammunition boxes which were buried somewhere near the village of Ommeren. The Dutch government even took action by bringing a Nazi officer to the Netherlands with the goal of locating it; yet unfortunately those attempts proved fruitless.

It is possible that the stolen items were discovered by fortune seekers, at random, and never reported. Additionally, it could be that the Nazis had taken possession of them in a matter of days after their original theft.

On Tuesday, hundreds of records will be made available to the public and among them lies a treasure map. The National Archives is home to 15 million photos, 300 thousand maps, 142 kilometers of paper archives, as well as an astonishing 1.2 petabytes of digital files according to newswire ANP reports. This expansive collection contains something for everyone!

Processing…
Success! You're on the list.
Whoops! There was an error and we couldn't process your subscription. Please reload the page and try again.
Continue Reading
You may also like...
Related Topics:history, Treasure