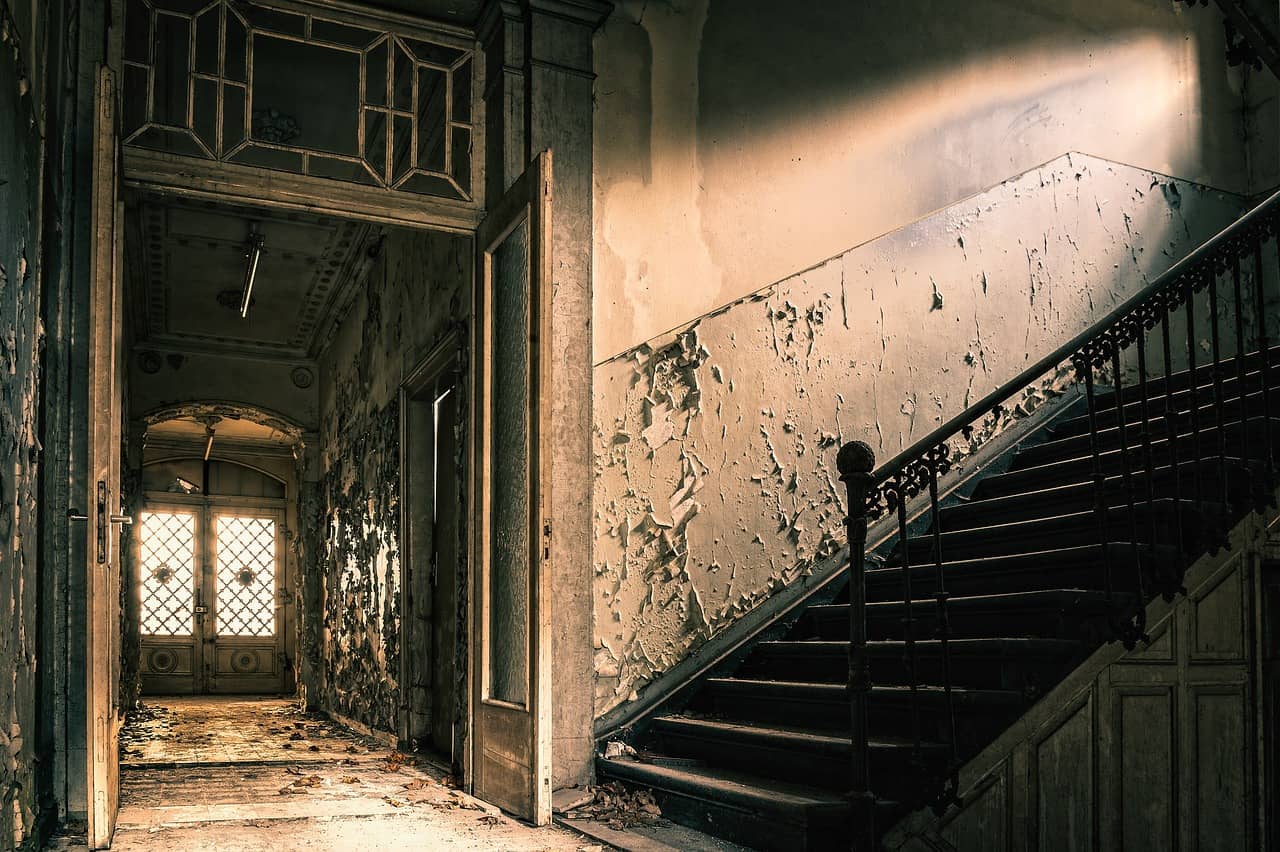 2022 was a challenging year for all of us. And the Paranormal field, which has never been very profitable, was unsurprisingly experienced no exception from these hardships. Us investigators are used to this, I’ve personally had a wide variety of side jobs to help support my research and expeditions, and most investigators outside the travel-channel-aristocracy can relate to this struggle. But the core component of the field also took some hits; The cathedrals that house the stories of the Strange, Haunted locations. Without these liminal and historic places, many of these stories would die off, and much of the paranormal content we enjoy could not be produced(except for you Squatchers, Bigfoot is recession proof).

Whether you’re a TV show, a writer, an influencer, or a fan, these places are the source for our passion and hobby and so it’s on us to help spread the word and do our part in preserving haunted history. In this article youll find hurricanes, government incompetence, and simply pure misfortune, as we highlight some of the haunted locations that need our attention the most.

This strange home is bizarrely unique. Built by famous architect Melvin Greely it has 21 rooms, 7 different levels, a variety of step ups and downs, strange rooms and features, The Betz Mystery Castle was originally built for the Neff Family, but the family was hit with a series of tragedies and were never able to move in. Sitting on the highest hill in Duval county, on a historic island with decades of history, the strange looking house soon became the local House on Haunted Hill. Gilded age teens would dare each other to go out to the weird house, and they would report strange lights, noises, and specters.

Then, in the 70s, the Betz family moved in. They experienced the strange phenomenon for themselves, but stranger yet, they found an odd metal sphere on the island. This sphere began to move on its own within the home, seemingly showing intelligence. This was well documented, so much so that J. Allen Hyneck and even The Navy got involved in investigating the sphere.

This one admittedly is a selfish addition to the list. Earlier this year I published my second book, A Place Between Time and Space which focuses around the stories and my investigation inside this forgotten structure. But during my time in the house, the uneasy presence that exudes from the house slowly turned to admiration. At first, I envisioned myself buying the massive home and renovating it to be my own personal haunted house. But remembering my foolish career choice of writer/paranormal investigator, I decided it would be best to approach it from the public angle.

In fact the home already sits on public land, it already belongs to us. All the remains now is to show the State of Florida that this house is part of history and needs to be preserved.The state used it to house rangers for a while, but it was abandoned afterwards for unknown  reasons. Sitting between two historical locations, the addition and restoration of the Betz house to the cultural park would surely bring a variety of paranormal enthusiasts from around the world. If you agree, you can sign the petition below!

The Old Arcadia Opera House is a beautiful second floor theater sitting on the main street of the small town of Arcadia Florida. After a fire burnt most of the town in the early 1900s, this structure was one of the first new ones to be built. After a stint as a theater it was turned to an antique museum, fitting in with the several other such shops on the street. It was that way when we visited, shelves of glassware standing where the crowds used to sit. Onstage was a small museum, featuring a stagecoach, a prop noose, and a small  faded sign certifying the location as haunted from a now defunct paranormal group.

According to staff and current investigators, the location has indeed earned the certificate. Staff have reported hearing a wide variety of strange noises. Children laughing and running through the halls, sounds of a crowd chatting, and other strange voices will echo through the building. But as always, when they rushed to check the source of the sounds, nothing was there. Most ominously, people often report seeing the figure of a small girl, oftentimes seen standing in the coroner rooms 2nd floor window.

Shortly after our visit the antique shop closed, and the Opera house was restored into a functioning theater once again. Ballet classes, music, and local production are all hosted there, as well as a monthly paranormal investigation hosted by Sarasota Paranormal. Unfortunately about a year after this great revival, Hurricane Ian swept through the town of Arcadia. The whole area was inundated with flooding, and the Historic Opera House lost a huge portion of their ceiling, right above the stage. Efforts are currently underway to restore the venue, but they could use as much help as possible. You can donate to their Go Fund Me as well as their Moveon Petition.

The structure that stands today was built in the 1830s, but the property was occupied since the late 1700s, originally by Revolutionary War soldier George Weaver, who was awarded the property for his service. It was later occupied by a former sailor, a civil war soldier, and finally completed by his son in 1960. It was around this time that the haunting legends began.

People have reported experiencing a wide variety of phenomena inside the house. Full body apparitions and shadow people have been reported. These figures are initially thought to be children playing hide and seek, and often take this very spooky form. A variety of audio phenomena is also reported, from strange voices to even the sound of muskets firing. Images showing a supposed phantom of a child, and another of a Native American have been taken at the location.

The location is now owned by a medium by the name of Lorna Reynolds. She uses the home to host psychic readings, parties, historic tours, and of course, ghost hunts. Many Youtube channels have filmed in this location, it’s quite a popular spot in northern New York. But like all the others on the list, it is in trouble. Reynolds’ business partner has backed out of the arrangement, and the home is in financial trouble. You can support the location by donating to their Go Fund Me, or by booking an investigation! Links provided below

The oldest building on our list, it is believed to have been constructed around 1610. Scholars believe it was used as a court for a while, before becoming a private residence for over 400 years. With such a long history, and stunning presence created by the gothic architecture, it is no surprise that this building has garnered a reputation as one of the most haunted places in the United Kingdom. The home has appeared on a variety of British ghost hunting television programs, with a variety of strange phenomena being reported for the cameras.

There are a few stories of death on the property. Including one of forsaken lovers, where the woman accidently fell into a well on the property and died. Her father, the lord of the house at the time, was said to take his life shortly afterwards. Both of their ghosts are said to be seen on the premises. Ghostly legends date back to the late 1800s, when a gardener reported a set of phantom hands coming from the well, trying to drag him to the water below. To this day, people report feeling touched by unseen forces, hearing strange laughter and sobbing, and seeing strange apparitions ducking out of sight when looked at.

But like many historic buildings, the Plas Teg House is in a constant state of repair. The Plas Teg  Historical Preservation Trust has started a Go Fund Me page in hopes of raising some additional funds in preserving this imposing, impressive, and haunted structure. Specifically, this year the trust is looking to make repairs to the roof and treatments for the aged timber throughout the structure. You can help by donating with the link below.

Potentially the most famous home on this list, Boleskine house has been the home to more than one famous individual. The stunning home was built above the famed Loch Ness and was commissioned and built by Archibald Campbell Fraser of Lovat. A famed aristocrat, in the mid to late 1700s the home was originally built as a hunting lodge. After Arcibald passed, he gave the home to his grandson, who sold it in 1899 to ‘the wickedest man in the world’ Aliester Crowley. It was under his stewardship it would gain its fame.

Crowley believed the location to be the perfect spiritual retreat, and it was here that he would conduct a variety of rituals. This most important and taxing of which was said to be the Magic of Abramelin. A ritual with Aberhamic or Satanic heritage, depending on who you ask. The end result is also debated, as some say it was a way to talk to God or summon a guardian angel. Others say it conjured a different spirit, a malicious one. Crowley was never able to finish the ritual and many believe the gate way he opened still exists at the home, with some even farther out thinkers blaming Crowley for the appearance of the Loch Ness monster some years later.

After Crowley the home played host to a suicides, scandals, and slowly began to fall into disrepair. Jimmy Page, guitarist for Led Zeppelin, purchased the home for a while and had some repairs done, mostly by his friend Malcom Dent. Dent experienced a wide variety of paranormal activity while living in the home. Furniture rearranging itself, strange animal noises, and the feeling of an evil presence.

After the brief ownership, the home fell into disrepair again, that was until now. The Boleskine House Foundation purchased the property in 2019, and are taking part in grand repairs, including adding an entirely new roof. There are a variety of ways you can get involved including sending donations or scheduling a visit. Arrangements can be made through their website, link below

Processing…
Success! You're on the list.
Whoops! There was an error and we couldn't process your subscription. Please reload the page and try again.
Continue Reading
You may also like...
Related Topics:Featured, paranormal, Paranormal Experiences