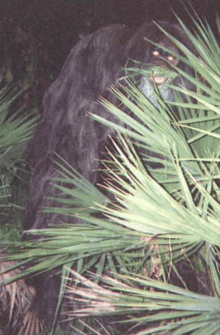 A few months ago I wrote about a strange sighting that I had experienced years ago in Myakka State Park FL. Myself and two friends saw a large orange creature move away from the shoreline of Myakka Lake, and back into the forest. This sighting still remains a subject of hot debate among my friend group, with 2 out of 3 of us believing that it was a Tiger.

I believed it to be an escaped circus or pet tiger, as there is a surprisingly large number of those in this area. I even referenced another sighting that made the news right around the same time, of witnesses seeing three of the big cats just outside of the park in Myakka City.

But investigators have brought to my attention a new case-based out of the park that is certainly more paranormal, while still being well within the realm of cryptozoology. That is the case with The Myakka Monster.

Back in 2013, Bigfoot hunter Stacey Brown and his team were investigating the possibility that a sasquatch creature could be occupying the immense swamps and forests of the parks. They crossed the low dam into the northern part of the park. This part is dense, and they’re used to be only a single trail that would wind a ways into the brush. In recent years this trial has become overgrown, and people are no longer allowed to cross the dam that leads to this area.

Interestingly enough, this is the same general area in which we had our Tiger sighting, although much closer to the main park than our encounter. With Stacey at the lead of the 5 man team encountered something strange during one of their investigations. A large herd of pigs rushed in front of the group, the hogs seemed startled by something larger. The group moved in formation to flush out whatever it was, when it bolted, running directly past two of the investigators.

Unfortunately, the footage they shot did not capture the creature. but the group was sure they had just had an encounter with a bipedal ape in the backwoods of Mayakka. There were footprints, but other samples they tried to collect turned out fruitless.

Now, some 8 years later, Stacey brown is back trying to locate the squatch once again. After teaming up with local enthusiasts they are returning to the case of The Mayakka Monster. They’ve filmed interviews with several people from around the county relaying their encounters with Bigfoot-like creatures in the park.

Records from the BFRO (Bigfoot Research Organization) states that there have been 8 other encounters with sasquatch-type entities in Sarasota, most of which are associated with the park. The earliest case dates back to 1978. but there was an encounter the year after, and the year before Stacey’s encounter. One report from 2000 even included pictures.

A photo sent to the Sarasota Police department, 2000, Experts declared it to be a photo of an orangutan

With these cases, one must revisit the large cats that have been seen as well. Phantom cats are a phenomenon common throughout the world. The apparition of large mysterious cats in places in which it should be impossible for them to be. This is a paranormal activity that is, while not as recognizable as Bigfoot, still, a common trope that is heard time and time again. An example of this can be found in the UK’s Rendlesham Forest, which is home to a famous reported UFO landing. In the decades since large black cats have been seen in the woods with some regularity.

Perhaps something similar is happening in the state forest. Perhaps it is becoming one of these hot spots for strange activity. But with only a couple of Tiger sightings and a handful of Bigfoot encounters, the verdict is still out on whether this is true.

Video: Is The Floating Broom A Glitch In The Matrix Or Just A Hoax
The Betz Family Sphere