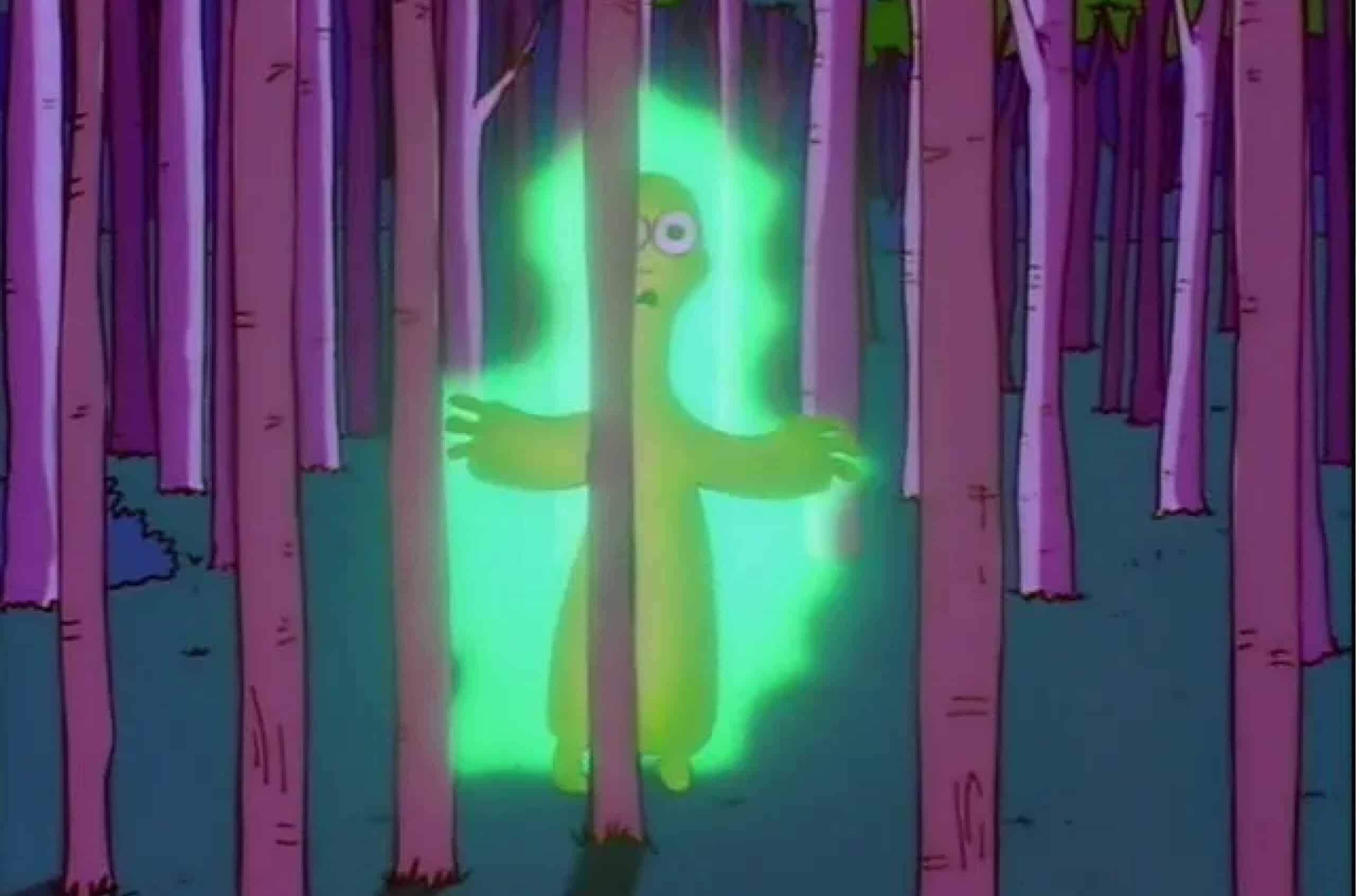 The Simpsons is the longest running animated series in history. With 33 consecutive seasons under its belt, the show has been painting a satirical portrait of the American Nuclear Family since 1989 and continues to evolve with the changing times.

Opinions may vary on which era of the Simpsons is the greatest, which jokes hold up the best, and whether or not the show should have ended literally decades ago, but the staying power of The Simpsons can’t be overlooked.

With such a wealth of stories in the portfolio, it seems inevitable that the Paranormal would show up at some point. Here are five (of many) references to the Paranormal in The Simpsons universe.

Extraterrestrials have made multiple appearances over the years. From a non-canon Treehouse of Horror episode in which we learn Maggie is an alien hybrid (Season 10, Episode 4) to Bart’s paranoid obsession with the UFO conspiracy, (Grandpa Vs. Sexual Inadequacy, Season 6 Episode 10), as well as many other nods and references too numerous to list here (over 30 as of 2022).

The best known and perhaps best written example of this comes in the 10th episode of Season 8 – The Springfield Files. A full blown X-Files parody featuring cameo appearances by David Duchovny and Gillian Anderson, the episode also pays homage to the well loved In Search Of, including voicework by Leonard Nimoy.

Homer has a sighting of a glowing alien being while walking (drunk) through the woods one night. Mulder and Scully get involved, the town is whipped into a frenzy, and the local news anchor refers to a shaky evidence video as “a close encounter of the blurry kind.” The episode takes a fun stab at the hysteria that often surrounds paranormal sightings.

Someone on the Simpsons writing team is a Bigfoot believer or at the very least a Bigfoot fan. Since the jump, the world’s most famous cryptid has been a part of the Simpsons universe, and apparently, Moe Szyslak was raised by one (Season 23, Episode 12).

There are plenty of one liners and quips (“Can you introduce me to the sasquatch? I like his style.”) The classic 7th episode of Season 1 – The Call of The Simpsons – makes the greatest case for a cryptozoology enthusiast on The Simpsons creative staff. After a series of misadventures, Homer becomes lost in the woods, gets covered in mud, and is mistaken for a sasquatch by a group of hunters.

The tabloids get involved, Homer is taken to a primate research facility and things snowball from there. A true highlight of the early seasons and a clever nod to Cryptid enthusiasts which holds up even thirty years later.

The Chupacabra hasn’t made an actual appearance in the main line TV show but did get a starring role in one of the many Simpsons comic books. In the Treehouse of Horror comic From Duffs Till Dawn, Professor Frink creates the blood sucking Chupacabra in an experiment gone wrong. The creature goes on a rampage with an impressive body count, until the heroes manage to poison it by getting it to ingest alcohol. The Chupacabra was also mentioned on at least one occasion in the series (“and pop goes the Chupacabra!”) in the 5th episode of Season 21 (The Devil Wears Nada).

Brainwashing is one of those topics that straddles the line between the unsolved and the mundane – we know governments have worked on it, but debate continues as to just how possible true brainwashing is. Subliminal messages are another thing that we’re quite familiar with, and this episode makes references to both. In New Kids on The Blech (Season 12, Episode 14) Bart, Ralph, Milhouse, and Nelson are recruited by talent agent LT Smash to form a new boy band called The Party Posse. N*Sync makes a cameo (“word”), and the entire operation turns out to be a covert recruiting initiative. The US Navy uses the Party Posse’s music to hypnotize civilians into enlisting, and the final sequence of the episode even mentions Godzilla. The episode will ring familiar to anyone with an interest in MK Ultra and other like conspiracies.

I’ll admit that this example may be a mere coincidence, but even if it is, its existence may be considered synchronistic. In the 12th episode of Season 10 (Pokey Mom) Marge befriends a convict named Jack Crowley when she discovers that he has a natural talent for art. An artist herself, Marge opens her home to Crowley and even secures him a job painting a mural for Springfield Elementary. Jack turns out to not be such a great guy and winds up right back in prison, but it’s the character’s name that makes for an interesting study. Jack Parsons and Aleister Crowley are well known to many paranormal enthusiasts and were both villainized, misunderstood, morally ambiguous artists and occultists. Might this blending of names indicate that Crowley and/or Parsons provided inspiration for the synonymous Simpsons character? Maybe not, but in the paranormal world, anything is possible.

These are just a few of the nods to Forteana in the Simpsons universe. The Loch Ness Monster, werewolves and even the devil himself have also been featured. Have you noticed any? Let us know.

Processing…
Success! You're on the list.
Whoops! There was an error and we couldn't process your subscription. Please reload the page and try again.
Continue Reading
You may also like...
Related Topics:paranormal, Simpsons