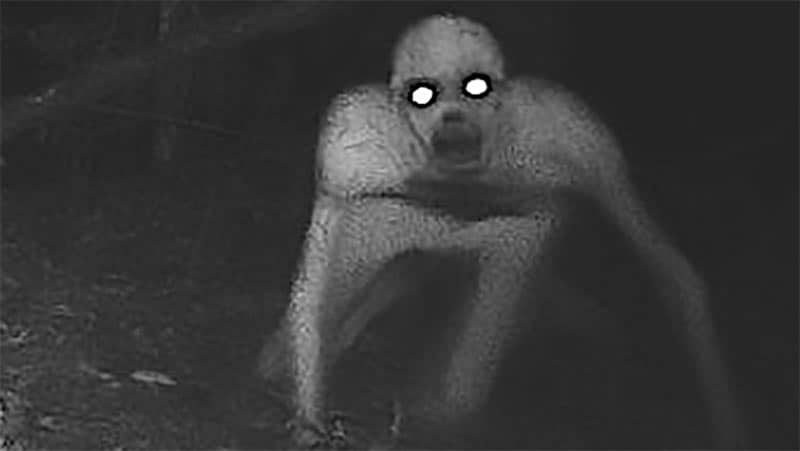 The Rake Triangle of California

The year was 2005! YouTube came into existence, Christian Bale became Batman, and Mariah Carey had the Billboard top song of the year! Wow, things have really changed! There was also that whole thing about a memetic virus monster being unleashed onto the world. Did that slip past you while you were trying to upload your first YouTube post? 2005 was the year a thread on 4Chan created what would eventually be known as The Rake, a fictional humanoid monster designed for Creepypastas. However, fictional may not be the appropriate word anymore. People are seeing this creature and the reason may be a bit beyond the prototypical flesh and blood cryptid.

In true creepy Creepypasta fashion, the Rake developed over time from its inception as a multi-eyed monster with a hinged skull to the pale crawling humanoid that we know today. And with this change in appearance came its growth in popularity. It was even featured in the Something Awful forum that would inspire the creation of Slenderman. And much like Slenderman, this verifiably fictional character has seemingly broken the barriers of reality and manifested into our world. Sightings of “Rake” like humanoids started to grow when Creepypastas hit their zenith in popularity around 2012-2014. With so much attention and energy given to these stories and their monsters, do we make them real? That seems to be the case in my home state of California, specifically the northeastern portion of the state. From Sacramento to Tioga Lake, and down to Fresno there seems to be an influx of “Rake humanoid” sightings. Author and researcher Lon Strickler have identified multiple sightings of these creatures via his website Phantoms and Monsters. Let’s dive into the stories.

One of the most notable reports was a sighting near Roseview Park in Antelope, CA. At around 2 AM a humanoid like creature around 7 to 8 feet tall was spotted dashing from the park into the fields adjacent to the park. The person spotting the creature added an eerie note that a foreign calm washed over them as they saw the humanoid as if lulled into a false sense of security (common in UFO reports). Guttural and inhuman yells have also been reported coming out of Roseview Park at night. *Eyewitness reported to Lon Strickler of Phantoms and Monsters*

This follow up Pale Crawler sighting in the Sacramento area occurred in Loomis, CA. The crawler was spotted in a wooded area near a lonely stretch of road. An odd detail to the report was the crawler appeared to be wearing a green shirt. Some people in the Loomis area call them “White Walkers” as they are described as having white faces with stringy black hair. The person reporting drew a comparison to the Skinwalker legend. *Eyewitness reported to Lon Strickler of Phantoms and Monsters*

Moving east we find ourselves in the Tioga Lake area of the Sierra Nevada Mountain range where we meet the frightening Penelope. Seen in the Sierra Nevada mountain range of California, Penelope has the classic characteristics of a pale crawler with the added creepiness of resembling a classic witch. It is said she has a deformed face, no clothes, long limbs, and dirty stringy hair. She has razor sharp claws and is capable of disemboweling or decapitating victims. You will know of her presence with a horrifying high-pitched scream that echoes through the mountain range.

She is believed to be a woman who was lost to the Sierra Nevada’s vast terrain. Somehow, she survived but became a flesh-eating monster. This is extraordinarily similar to the Wendigo legend. Penelope’s story even has some commonalities again, with Skinwalker lore. Apparently, park rangers have admitted sightings of a creature fitting this description several times near the Sierras. One thing is certain, the Sierra Nevada mountain range is a hotbed for supernatural occurrences. With constant sightings of Bigfoot, Tahoe Tessie, the water babies of pyramid lake, strange light anomalies, and now Penelope… it’s best to not venture off into the Sierras alone.

The Sierras are not very far from the infamous Nightcrawler sightings of Fresno and the Yosemite Valley. Interestingly, the original Nightcrawler sighting in Fresno occurred in November of 2007. This is closer to the time when The Rake had a slightly different appearance in the memosphere. The Rake was not yet its fully formed pale humanoid self. Perhaps the infamous Fresno Nightcrawlers were an early materialized version of The Rake? There are so many interesting questions when it comes to The Rake and its seemingly impossible manifestation into our reality that I felt I needed an expert opinion. I asked the man himself, Lon Strickler a few questions about “The Rake phenomenon” and what it could all mean.

Nick:  When did you first come across The Rake/Pale Crawler phenomenon?

Lon: I became aware of the phenomenon about a decade ago.

Nick: Do you think “Penelope” of the Sierra Nevada Mountain Range is related to The Rake/Pale Crawler phenomenon?

Lon: I do believe that the Penelope sightings are definitely a version of Pale Crawlers, but perhaps different entities.

Nick: I noticed that multiple reports have come out of the Sacramento, CA area (Loomis and Antelope), does this seem to be a “hot spot” for other anomalous occurrences?

Lon: The Sacramento region has also been very active for a variety of phenomena, including UFOs and Bigfoot.

Nick: Many of these reports gained notoriety after the “Rake” Creepypasta became popularized. Do you think this creature could be some sort of tulpa or channeled memetic virus? Is there evidence that it could be a flesh and blood cryptid?

Lon: I feel that memes can become thoughtform generated and manifest entities. I also believe that there may be a possibility that these Rake/Pale Crawlers could be the nexus of an unknown humanoid species. At this point, there is no physical evidence to support either theory. My book titled ‘The Meme Humanoids: Modern Myths or Real Monsters.’ delves into this topic thoroughly and is available now!

My final thoughts, the Rake is a creation, a metaphor, an allegory, all are true. However, I believe there is an objective reality to the sightings and encounters that people are having. I started a weekly poll a while back on my Instagram page (California Creepypasta) called “Do You Believe Fridays” which presents a topic of high strangeness and asks a simple question, do you believe? You can vote yes or no. Overwhelmingly each week the results tend to be a triumphant yes. Now, I understand I run a social media page geared towards those inclined to believe in the supernatural. But, the comments, stories, and powerful messages I receive weekly about people’s experiences with “the other” showcase to me the power of the emotional response these experiences create. I am now starting to see the power of belief. Belief has the ability to create, project, manifest, guide, and shape reality. It also has the ability to terrorize. I used to ponder the question of what lurks in the shadows? Perhaps, the more important question is where do the shadows lead and where did they come from?

I want to give a big thank you to Lon Strickler for his time and his reporting on PhantomsandMonsters.com. Be sure to read his latest work ‘The Meme Humanoids: Modern Myths or Real Monsters.’

Processing…
Success! You're on the list.
Whoops! There was an error and we couldn't process your subscription. Please reload the page and try again.
Continue Reading
You may also like...
Related Topics:Cryptid Sightings, Cryptids

Nick Valenzuela Is the creator of California Creepypasta and Lead Journalist for Paranormality Magazine. Nick has been fascinated with the strange and mysterious all his life. Add to that, a zest for the open road and throwing myself with reckless abandon into adventure (sorry mom). Nick is a native Californian. A graduate of the Warren Institute for Paranormal Studies as a certified paranormal investigator. "I consider myself a Fortean and open minded researcher. "