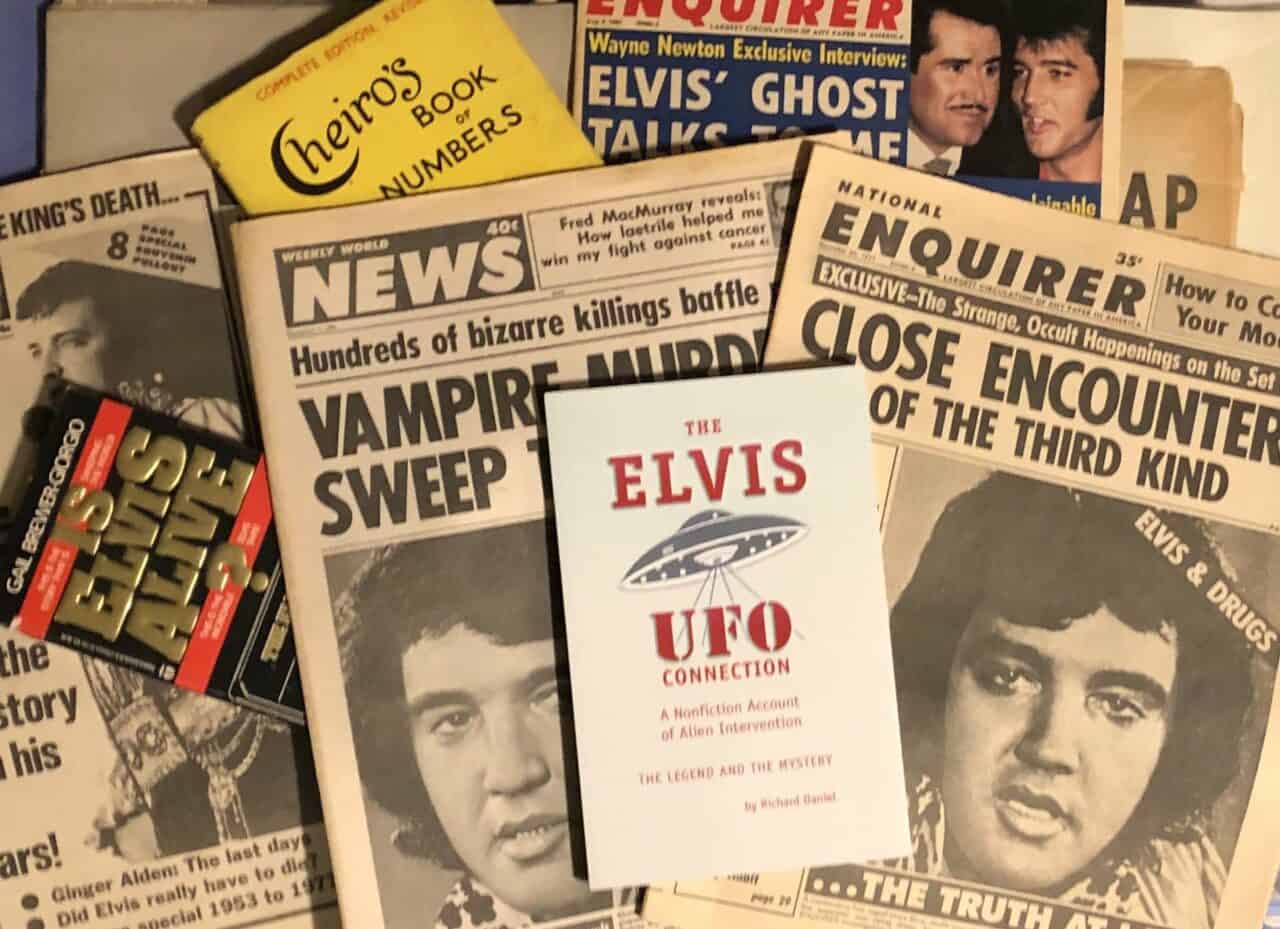 A King’s Ransom of Weirdness for Elvis’s Birthday

Elvis Aaron Presley, who would have celebrated his 88th birthday this January, is among the most iconic figures in the history of popular culture. The King of Rock and Roll died (allegedly, but we’ll get to that) in August of 1977, but his legacy lives on to this day.

The popularity and critical reception of Baz Luhrrman’s 2022 movie Elvis should serve as proof of his lasting impact. So ubiquitous is his larger-than-life presence on the broader landscape of popular media, that he exists now as almost a subliminal archetype to be invoked across all genres of expression.

His untimely and oft-debated death at age 42 only seemed to solidify this status, with the idolized public image of him becoming increasingly odd and tangential to various fringe subjects.

A staple of the tabloids such as The National Enquirer and The Weekly World News, he could often be seen along with headlines about UFOs, vampires, or Bigfoot. In the 90s, comedian and conspiracy theorist Richard Belzer riffed on this when he titled his 1999 book UFOs, JFK, and Elvis: Conspiracies You Don’t Have to Be Crazy to Believe.

While the book contains much more about UFOs and JFK than it does Elvis, there are plenty of weird ideas about the King to consider. So let’s take care of business, shall we?

The most well-known of weird Elvis ideas is that he didn’t die in 1977, but rather faked his death, to be spotted later in fast-food restaurants or as an extra in movies like Home Alone. The Elvis sightings and theories began almost immediately after his death, when his estate, Graceland, became a tourist attraction.

A man named Mike Joseph visited with his family and discovered later that one of the photos he took appeared to show Elvis looking out from the doorway of the pool house on the grounds. The photo was later determined to not be the King, but that didn’t stop the true believers among his fans from believing that their idol was alive and well, but in hiding, having had enough of the spotlight.

Meanwhile, an author named Gail Brewer-Giorgio was so moved by the response of fans to Elvis’s passing that she was inspired to write a fictional novel about a singer called Orion who fakes his death for much the same reason.

She was unable to publish the book, the story of which she came to realize paralleled Elvis’s life in ways she couldn’t have known about. Details about the fictional Orion began to match memories shared by friends of Elvis after his passing.

Eventually, a singer named Jimmy Ellis started to perform under the name Orion. The singer, who always wore a mask, sounded an awful lot like the King, which seemed an intentional way of capitalizing on the idea of Elvis surviving 1977.

Unable to publish her novel, Brewer-Giorgio began to research and investigate the possibility that Elvis was still among the living. Her 1988 book Is Elvis Alive? outlined many of the theories, and even came with a cassette tape purportedly containing a recording of Elvis after his passing.

As previously mentioned, Elvis became a mainstay of tabloids and often in news media because of these beliefs. In the early 1990s, after enough time had passed since Elvis’s death, a commemorative stamp was proposed to honor his life- but it had to be postponed due to the growing belief that he hadn’t died at all! A series of TV specials, hosted by actor Bill Bixby, dissected these theories and presented the evidence to the American public.

The high water mark for these sightings and beliefs was likely during this area, but the basic concept has never truly gone away- and has often become fodder for jokes and ridicule around fringe ideology, lumped in with aliens, the Loch Ness Monster, and ghosts.

Elvis and the UFO phenomenon shared more in common than proximity to each other in the tabloid pages, or so the authors of The Elvis/UFO Connection would have you believe.

Writing as “Richard Daniel”, the authors Richard Vaculig and Daniel Guyll take you on a cosmic odyssey which begins with insights gleaned from a belt buckle Elvis was filmed wearing at a concert. The symbol, which looked a bit like the symbol for infinite, struck them as appearing to be the eyes of a gray alien.

The book attempts to make a case for Elvis as an abductee, and possibly a generational one, as they supply evidence that his mother Gladys may have had similar experiences. They further speculate that the King may have been the result of an alien / human breeding program, and that his talents had much to do with his interplanetary heritage.

According to the book, Elvis’s father Vernon had stepped outside of their home in Tupelo the night Elvis was born; overwhelmed with mixed emotion, as the birth of twins had resulted in the death of one of them, Vernon reportedly saw a mysterious blue light above their house.

The book also includes a story told by bodyguard and member of the “Memphis Mafia” Sonny West, about a night in 1966 when Elvis spontaneously suggested they go outside – just in time to see a mysterious light in the sky.

West was skeptical that it was anything other than a plane, although he noted it made no noise. Elvis insisted it was something else. He then instructed Sonny to go inside to get someone, and when the two returned Elvis had vanished.

They found him a bit later, down the street, and he cryptically told them “They’re gone. They’ll be back, but they’re gone.”

Was Elvis a contactee? An abductee, or even half alien himself? We may never know…

Elvis From Beyond the Grave

There are other people who perhaps never considered an extraterrestrial origin for Elvis, and who know for a fact that he died in 1977. How do they know? Well, because they have spoken to his discarnate spirit.

Legendary paranormal researcher and investigator Hans Holzer is among those who claimed to have received messages from beyond the grave, from the King himself. These were secured through the channeling efforts of Dorothy Sherry, a medium living in New York, and verified by Elvis’s half-brother David Stanley.

While many claimed to have contacted the dead celebrity, Sherry was the only one verified by Holzer. A less-than-convincing album had been released just two years after Elvis’s death, allegedly recorded in a London Spiritualist Church.

The Elvis Presley Seance featured a medium named Carmen Rogers, and its release in the United Kingdom sold poorly.

Others claim to have seen the ghost of Elvis, at Graceland and elsewhere in Nashville, but also in Las Vegas where he performed such as the Hilton Hotel.

The building which used to be home to the recording studio where Elvis recorded his early songs is said to be haunted by him as well, with poltergeist-type phenomena occurring when his name is mentioned. His ghost is usually described as wearing the white jumpsuit he was known for during his Vegas days.

Elvis Has Left the Building

As a final bit of weirdness, Brewer-Giorgio based a lot of her ideas over her theories on Elvis’s apparent obsession with numerology, and specifically the book Cheiro’s Book of Numbers.

The occult science of reading fortune or directing your fate through numbers, by planning based on the numerological value of dates, may have influenced his choice of timing on faking his death.

In the book, Cheiro uses Tarot to illustrate the occulted meaning of numbers, which means that Elvis’s chosen date of August 16 would have been represented by The Tower, the 16th card of the Major Arcana. The imagery on the card depicts a tower being struck by lightning, with a crown falling from the top and a person in freefall.

The falling crown would be a good image to associate with Presley’s passing, and he had incorporated the lightning bolt into his personal TCB logo as well.

But here’s the odd thing – August 16 was also the anniversary of the death of “King of the Delta Blues Singers” Robert Johnson, who, legend has it, sold his soul for the ability to play guitar. He also was a founding member of the “27 Club”, musicians who have died at the age of 27. More recently, the Queen of Soul, Aretha Franklin, also died on that date.

Wherever Elvis is now, on another plane of reality, perhaps, or in a flying saucer; whether he’s hiding in the woods with Bigfoot or simply resting in his grave; or whether he’s alive in the hearts of fans who still dig his music, this writer hopes that he has a very happy 88th birthday.

Processing…
Success! You're on the list.
Whoops! There was an error and we couldn't process your subscription. Please reload the page and try again.
Continue Reading
You may also like...
Related Topics:Aliens, Featured, paranormal, UFO