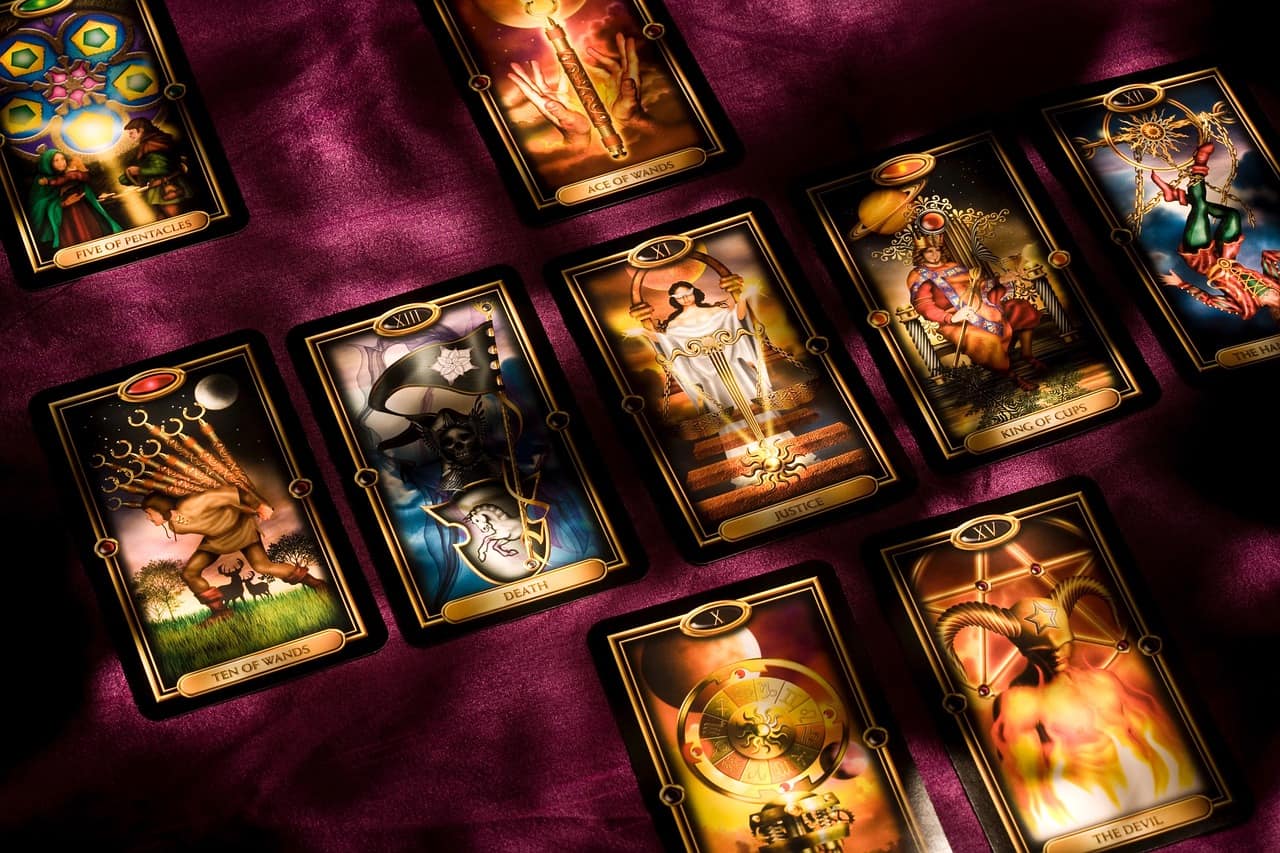 Today, tarot card reading in North America is a way of gaining answers to specific questions by interpreting different card meanings.  However, tarot began as a card game.

Although there were many variations on the gameplay over time and from region to region, the origins can be traced back to 1430s Italy, where this game became popular amongst the wealthy.  Each card was hand painted, making each deck a miniature art collection.

The word tarot was derived from the Italian “tarocchini”, the root “taroch”, according to Wikipedia, was a play on the Italian word for foolishness in the 15th and 16th centuries.

In the 1700s, the French inferred that the mystical use of the tarot was brought to Europe by the nomadic Romani people.  Further studies linked the occult meanings to ancient Egyptian theology and the teachings of the moon god, Thoth.  The occult organization, The Hermetic Order of the Golden Dawn, is credited with making this form of cartomancy popular in the English-speaking world in the later 1880s.

The first publications we see in English were translated from French occultists’ writings by Golden Dawn member, Arthur Edward Waite in 1886.  Designed by Waite, with art by Pamela Colman Smith, the Rider-Waite-Smith was released in 1909.  The deck featured illustrated scenes on all cards.

If you ask modern tarot card readers, like Karly Latham, @thevillagetarotwitch on Instagram, they will probably tell you, “there is no right or wrong way to read tarot cards.”

Karly has been reading cards for four years, since being introduced to her by a psychic medium evaluating her newly-moved-into haunted house!  “She stopped mind-reading, pulled out an old dog-eared set of tarot cards,” Karly explains, “she said ‘I was asked to give you these’, and handed [Karly] the cards.”

After learning the basics, Karly began doing readings for friends and now has her own tarot reading business, under her aforementioned Instagram page.

“Tarot is a tool that connects you to spirits [or a higher consciousness] and helps you learn more about yourself,” Karly says.  “Go into it with an open mind and don’t expect your future to be told.”

I asked Latham what people should expect from doing readings.  “To see things from a different perspective.  To view the world as a bigger picture, while obtaining the self-awareness of where your place is in that picture.”

There are a multitude of tarot decks and guide books in today’s market.  I asked Karly how to choose which deck is right for you.  “I pick based off of the art work. There are a lot of decks to choose from, so I’d start by picking a deck with art that calls to you. It’s more about the connection than the deck itself.”

Look no further than your local bookstore or occult shop, for a wide selection of tarot cards!  If you’d like to try a reading you can connect with Karly Latham, @thevillagetarotwitch, on Instagram.

Processing…
Success! You're on the list.
Whoops! There was an error and we couldn't process your subscription. Please reload the page and try again.
Continue Reading
You may also like...
Related Topics:Featured, spiritualism, Tarot

Greg lives in Burlington, Ontario, Canada, has two daughters and enjoys looking for Bigfoot while at his cottage in Northern Ontario. Greg is a writer at Paranormality Magazine, hosts the live annual Cryptid Christmas Eve Instagram livestream on all.the.weird and the bi-weekly Clubhouse show, Cryptocasters. Greg also enjoys songwriting, toy collecting, and drawing in his spare time. He has been writing for Paranormality Magazine since April of 2022.