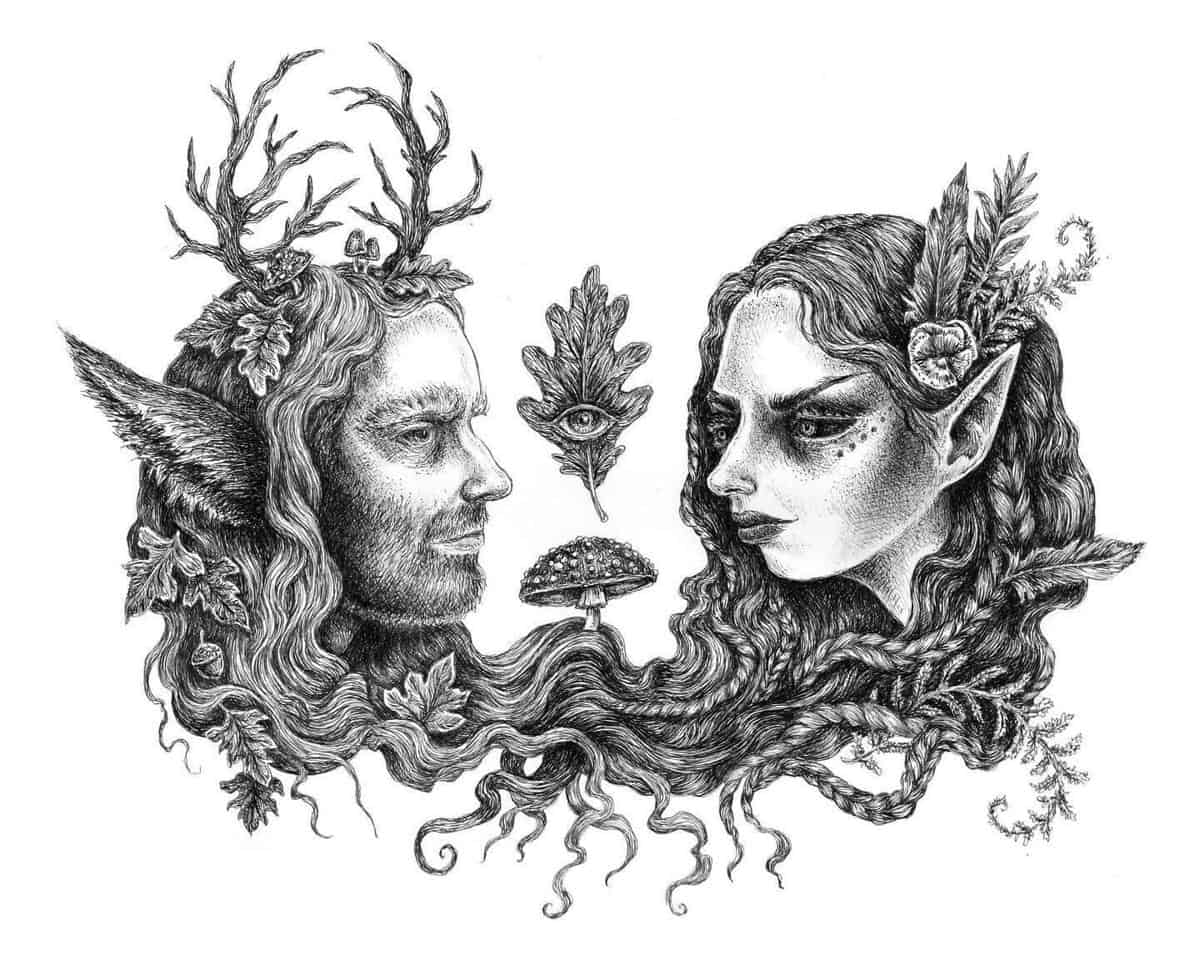 Artist, illustrator, clothing designer, entrepreneur, and very soon, store proprietor. Brett Manning wears many hats, as followers and fans of her work are well aware. Her style of art can be difficult to describe with brevity. Whimsical, witchy, haunting, intricate, beautiful, classical, ethereal – the adjectives seem to pile on one another. Brett’s mastery of her craft has spawned many imitators and, in some unfortunate cases, outright plagiarism. To call her fan base “substantial” would be an understatement (she has 124k Instagram followers at the time of writing), and only a few minutes browsing her website makes it easy to see why. We caught up with Brett between projects this month, and she was kind enough to take some time out of her day to answer a few questions.

Brett: I’m really bad at interviews, just so you know.

Aaron: Oh that’s okay, I’m new at this, so I don’t really know what I’m doing. We’ll meet in the middle.

Aaron: When you aren’t creating cool art and clothes, what keeps you busy?

Brett: I mean, I really love the outdoors. Hiking when I can. I have a pond close by, so I’ll take the dog there and kayak. Just basic – well, maybe not basic – fun outdoor stuff I can do with my dog.

Aaron: You made a really exciting announcement today – What can you tell me about The Lantern?

Brett: Oh my gosh, it’s crazy that I’m publicly talking about it now because I’ve known about it for about a year. I have some friends who own a really old, historic building. They just converted the lower part into a record store, an arcade, and a bar. The whole upstairs is being worked on right now – it has a lot of rehabs that need to be done because it’s so old – but part of the upstairs is going to be a brick and mortar shop that I’m opening. So it’s really exciting but really overwhelming.

Brett: I’m just trying to bring something interesting to this downtown because, over the past several years that I’ve lived in Indiana, a lot of little businesses have been growing which is very encouraging. Walmart is not the only store that’s available. There are actually cool, creative little places so it’s neat to be a part of that. But at the same time, I’m also bringing something that’s kind of weird.

The location also plays host to live music, where Brett’s husband Frank, a musician, has performed in the past.

Aaron: What can you tell me about Your Folk Scholar?

Brett: I’ve kind of put that on hold for a minute. I have so many projects in the works right now, I don’t know why I chose that time to share that. But basically, I would like to illustrate a book one day, that has written accounts of people’s paranormal encounters and experiences. Mostly focusing on faery-type entities, elementals, sasquatch… not necessarily ghosty stuff, but more like creature kinds of things.

Aaron: More the cryptid realm than the ghost realm?

Brett: More things that are not human spirits. They were never human, basically.

Aaron: Do you have a favorite cryptid or entity that you’re particularly drawn to?

Brett: Something that pops up in my life and that I draw a lot, is a deer-headed man figure. I’ve associated that with Celtic mythology – like Cernunnos, the horned god – it’s like a faery kind of spirit or an “earthy” guy. Not really a cryptid, but that’s something that I connect with a lot.

Aaron: Do you have a paranormal experience or encounter that you’re comfortable sharing? I know these can be very personal experiences so if not I understand.

Brett: Well… I’ve shared stories before, so I’m not afraid (of sharing).

I’ve actually experienced a lot of little things, here and there. I’ve never full-on seen a sasquatch, but I can tell you the most recent thing. This literally happened to me two nights ago.

I was down in my barn with my dog and my husband Frank, and it was dark out, we wanted to come up to get some food. So because it was dark out and we don’t have any lights, I turned the flashlight on my phone on. My dog went first, followed by me, and I thought Frank was behind me. Out of the corner of my eye, I felt and saw a hand brush the side of my face. And I thought it was Frank, so I didn’t truly think anything of it. So I just smiled, and looked to my right… and he was like twenty-five feet behind me.

And when I really started thinking about it I was like, wait – the hand was up way too high, and the fingers were so long. It was a shadowy, black hand. I wouldn’t say it was like a shadow person – I’m gonna sound insane.

I assured Brett that she did not in fact sound insane and that as a member of the paranormal community I was eager to hear about the rest of the encounter.

Okay, so – earlier that day – I’m working on a book about faeries. I was thinking to myself, it would be so cool to have an interaction with a faery or similar entity. Nothing happened and I was disappointed, and then when I least expected it – the moment I’m walking up to the house with my flashlight – I see this long, knobby hand graze the side of my face.

Aaron: Does that correlate to any other mythology or entities that you’re aware of?

Brett: If people just heard that story without my backstory they might think it was a shadow person or something, but it didn’t have that kind of feeling to me, in any way. It definitely felt like some kind of dark, nighttime faery entity. Not a dark energy, but a night-time spirit. Something that lives in the woods when it’s dark.

It didn’t feel scary – it was more just, brushing the side of my face saying, “I’m here, you know I’m here.”

Aaron: The book on faeries sounds really interesting – what can you tell me about that?

Brett: That’s my BIG main project because I’ve put the folk scholar on hold for now until I finish this faery book.

Aaron: Do you have a release date in mind?

Brett: Every time I think I’m closing in on it I’m like, “oh well, I have to add this, I have to draw this now” so I have all these really elaborate drawings I’m going to be putting into it. And I couldn’t even say at the moment. Hopefully next year, that would be amazing. Maybe this time next year – it’d be cool to get it out in time for Halloween 2022. But we’ll see.

Aaron: You recently worked on Skinwalker: Howl of The Rougarou with Small Town Monsters. How was it working with those guys?

Brett: Oh, they’re really cool (STM). I love all their documentaries, they’re super fun. What I like about them is that they’re not pretentious – they’re really authentic about presenting these stories, and I appreciate that so much. But it was really cool to finally do something with Seth Breedlove – and it was kind of last minute, so I had to work really quickly, and that was the excitement behind it all for me. And I think they were happy with it, so that was nice.

Aaron: Are there any other upcoming projects you’d like to talk about?

Brett: I’m going to be vending at an event in Salem in October (The Salem Night Faire). I haven’t done any vending since before the pandemic, so it’s going to be interesting. It’s an outdoor event, and people will probably be dressed up in costumes. I’m excited to see that and be a part of it. It’s put together by the brothers who own a really cool tattoo studio called the Black Veil (Black Veil Shoppe of Drear and Wonder, owned by identical twin brothers Ryan and Matthew Murray). That’s really it – I haven’t done a lot like that lately. Oh, I am doing Cryptid Con. Totally forgot. That’s mid-November. I did it a couple of years ago and it was really cool, but it looks like it’s growing.

Aaron: Is there anything about your journey into the art world that you’d like to share with people?

Brett: My favorite artist and illustrator of all time, ever since I was a child, has been Beatrix Potter. She was a scientific illustrator, so there’s that aspect to it, but it’s also so charming, and I love that. Everything has a personality – even the plants and everything she draws – it’s very special to me.

Aaron: One last question – What is one thing people should know about Brett Manning?

You can find out more about Brett on her Instagram @brettmanningart, as well as follow her on Tumblr and Facebook. Brett lives in Indiana with her husband Frank and their dog. She designs comics, clothing, illustrations for films, and a myriad of other projects. Her new brick-and-mortar store, The Lantern, will open in 2022.

Brett: My answer is probably really weird, but my favorite artist and illustrator of all time, ever since I was a child, has been Beatrix potter. And she was a scientific illustrator, so there’s that aspect to it, but it’s also so charming, and I love that. Everything has a personality, even the plants that she draws, and it’s very special to me.

Processing…
Success! You're on the list.
Whoops! There was an error and we couldn't process your subscription. Please reload the page and try again.
Continue Reading
You may also like...
Related Topics:Art, Brett Manning, Fae